The news about pipelines, climate change, and energy policy has been surprisingly good lately. It’s got to make you wonder: are we winning? Have we turned the tide? We’re seeing a lot of minor victories that combine to make a powerful surge.

Just this week, a Minnesota appellate court ruled that the Sandpiper pipeline proposed by Enbridge (of $1.2 Billion Kalamazoo River spill fame) must comply with the environmental impact assessment rules, and that the state’s Public Utilities Commission erred when it gave the company a green light without considering its environmental risks. This is not what the PUC expected when they rubber-stamped Enbridge’s application on little more than assurances that there’s really nothing to worry about (cough*KalamazooRiver*cough).

Similarly, Alberta tar sands exploiter Nexen got quite a surprise when the provincial Energy Regulator issued a shutdown order in response to  “noncompliant activities at Long Lake oilsands [sic] operations.” The order came after a spill near the facility in June, which dumped 5 million liters [1.32 million gallons] of oil, bitumen, and sand into a nearby lands. The company said it could take two weeks to close off the 95 separate pipelines covered by the order. Would the shut-down order have come if the provincial government was still run by the oil-friendly folks of the Progressive Conservative Party, instead of the conscientious, environmentally concerned New Democratic Party? Maybe. But probably not.

Another Enbridge project, the Alberta Clipper, is under intense scrutiny, since it seems to be playing fast and loose with the rules on cross-border pipelines in an effort to escape the review process that has Keystone XL in limbo. The company is playing a shell game with existing pipes, trying to nearly double its capacity from the current 450,000 barrels per day to 880,000. And they’re doing it by simply switching pipes on either side of the border. You might admire it for the cleverness of the trick, until you remember that pipelines fail frequently and spectacularly– as the people of Kittson County, Minnesota, learned in very dramatic fashion when a gas pipeline ruptured and exploded early this month– and avoiding environmental assessments is immoral, if not criminal. And then there’s Enbridge’s track record for safety (cough*Kalamazoo*cough*$1.2 billion*cough cough).

People seem to have had enough of climate deniers in power. Australia just jettisoned their prime minister, Tony Abbott, whose policies helped put Australia among the worst per capita polluters in the world. Meanwhile Canada’s Stephen Harper, Big Oil’s man in Ottawa, stands a very good chance of being ousted like his Conservative Party brethren in Alberta, and trails candidates from both the NDP and the Liberal parties in the polls. And in the U.S., none of the GOP deniers vying for the White House is considered a serious threat to Democratic candidates who all acknowledge the threat of global warming. (Though Trump beats both Clinton and Sanders head-to-head in one recent poll, it’s hard to envision his xenophobic, misogynist, and racist rhetoric winning over enough women, Latino, and African-American voters to take the final prize.) 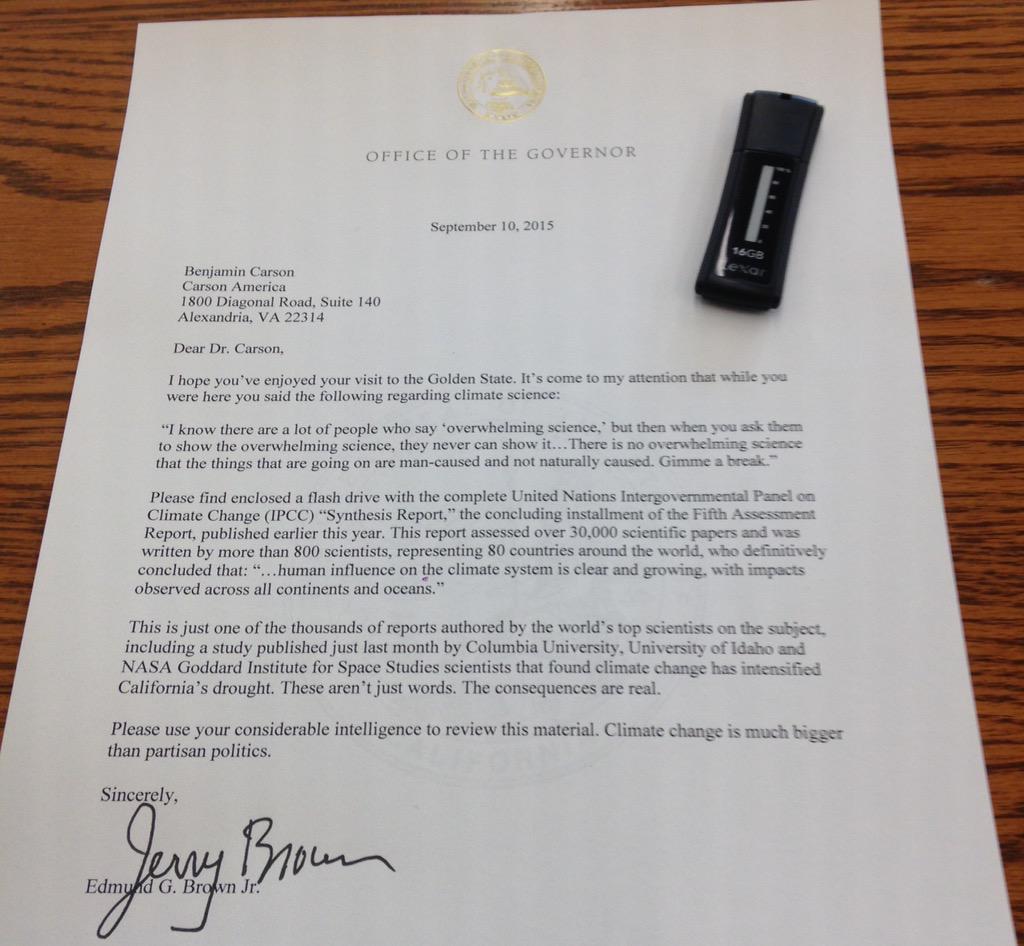 Brown’s state, now mired in its fourth year of a devastating drought, is about to become a global leader in clean energy and carbon reduction. And as Tim McDonnell writes in Mother Jones, it hasn’t hurt the state’s economy, as climate deniers often warn about efforts to rein in fossil fuels. California’s GDP has actually increased nearly 25 percent since 2000, despite the post-9/11 recession and the Great Recession of 2008. And all of this occurred while the state dropped its per-capita greenhouse gas emission by nearly 15 percent.

Electric and hybrid cars, which not long ago were mocked and sneered at by the automotive world, are making up an increasing proportion of the cars on the road. While hybrid sales have leveled off, sales of plug-in electric cars have surged, now making up more than 740,000 vehicles globally. Even snooty car makers like Porsche, long favored by driving purists, are getting in on the action. Its Mission E electric car debuted at the Frankfurt Motor Show, boasting a 0-62 MPH time of less than 3.5 seconds. Not bad for a technology that not long ago was mocked as apt only for golf carts.

There are a lot of reasons to be optimistic about the future of energy and climate policy. Greenpeace’s Jill Pape counts at least eight. Of course the news is not all good– there are many, many signs that global warming is already taking a terrible toll, and will continue to do so, and still get worse.

But there is reason to hope. The deniers have pushed themselves closer to the margins, and everyone from Pope Francis to Green Day to the SXSW conference is telling the world that there is a better way, and we should embrace it sooner than later.