We don’t spend a lot of time here at PipeLIES Exposed talking about climate change. Not because it’s not important– it most certainly is extremely important, possibly a key to human survival according to people who’ve been tracking that sort of thing– but because it’s not an effective organizing tool for stopping Keystone XL. As we’ve discussed, a lot of people understand that climate change is a serious problem yet still want to see KXL built, despite the fact that it’s poised to dump enormous volumes of greenhouse gases into the already saturated atmosphere. The phantom promise of jobs is all it takes to make some people forget that they need a viable ecosystem to live in.

But the news of the past couple of weeks has been so stupefyingly bizarre, with climate denial reaching new heights of absurdity, we just had to confront it.

How do you prevent climate change from growing as a public concern, maybe to the extent that you’re forced to make changes that could hurt your corporate backers’ bottom line? If you’re Florida Gov. Rick Scott (R-Tea Party), you simply ban the words “climate change” from government employees’ vocabularies. According to the Miami Herald:

DEP officials have been ordered not to use the term “climate change” or “global warming” in any official communications, emails, or reports, according to former DEP employees, consultants, volunteers and records obtained by the Florida Center for Investigative Reporting.

The policy goes beyond semantics and has affected reports, educational efforts and public policy in a department with about 3,200 employees and $1.4 billion budget.

This is no empty shell of a policy, either. Public Employees for Environmental Responsibility (PEER) reported this week that Scott’s gag rule has already claimed a victim. The organization says Department of Environmental Protection employee Barton Bibler was suspended from work because he took notes at a Florida Coastal Managers Forum that included discussion of climate change. Adding further offense, PEER says, Bibler was ordered to have ”his doctor supply the DEP with an evaluation of unspecified ‘medical condition and behavior’ issues before being allowed to return to work.” Which is to say, his mental health appears to be in question, officially, by his employer.

In his head-in-the-sand stance on global warming, Scott is joined by Canadian Prime Minister Stephen Harper. Big Oil’s man in Ottawa has been gagging scientists on the government payroll for years, silencing or burying information that does not support his Conservative Party’s pro-corporate agenda. Harper faces opposition from many quarters, including the pro-science group Evidence for Democracy, which argues with great effect that hiding the truth from the voters undermines democracy itself. (Congressional Republicans aren’t interested in silencing scientists to thwart informed voting; they plan on cutting off debate by cutting off funding to climate research.)

Unlike Harper, however, Scott may have to pay more immediate penalties for his willful ignorance. Florida has the second-lowest mean elevation in the US, and much of its southern half barely rises above sea level. Even modest ocean encroachment could have devastating effect on the Sunshine State. Most of its major cities, and the tourism dollars that they attract, would simply disappear. Long before that, though, residents might be chased away by the lack of drinking water, as salt-water encroachment destroys freshwater aquifers. And, as Salon’s Lindsay Abrams reports, the Federal Emergency Management Agency changed its policy on providing funds for disaster preparedness so that only states that include plans to address threats from climate change will receive FEMA funds.

Red areas are vulnerable to ocean encroachment of one meter.

Among the coastal areas facing inundation is Cape Canaveral, home to NASA’s space program. Which if were to come to pass, as agency administrator Charles Bolden told Tea Party Senator and climate denier Ted Cruz (R-Texas), would make it very difficult for NASA to do its job.

“We can’t go anywhere if the Kennedy Space Center goes underwater and we don’t know it, and that’s understanding our environment,” Bolden said during a Senate hearing chaired by Cruz last week. “It is absolutely critical that we understand Earth’s environment because this is the only place we have to live.”

That wasn’t the only time Cruz was made to look foolish in public recently. (Not to pile on, but watch his sure-fire Tea Party zingers absolutely bomb in front of the national firefighters union.) His appearance on “Late Night with Seth Meyers” was almost shocking in how easily Meyers threw Cruz off balance with some of the mildest challenges to positions Cruz clings to as tenets of his hyper-conservative fundamentalism, including his climate denial (which, scientists were quick to tell us, is based on laughable nonsense).

It’s interesting to note that Meyers, a “Saturday Night Live” alumnus, seems to treat climate change more seriously than his NBC colleagues at “Meet the Press.” While more responsible outlets like the Washington Post took climate denier Sen. Jim Inhofe’s (R-Okla.) to task over his snowball stunt in the Capitol, Chuck Todd, et al., got a good and well deserved dressing down from many in the media for their frivolous treatment of the subject, as they yukked it up over juvenile, anti-science, and deliberately misleading political theater. 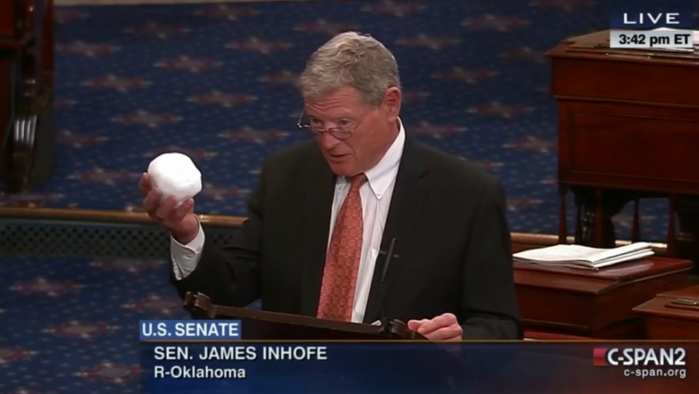 “Meet the Press” likes to swank around as though it’s our premier network public affairs program. Yet somehow its producers and host think it’s all right to treat a manifestly ignorant statement about climate change as “a fun moment” involving a “fun little prop” — and to pander to American anti-intellectualism by implying that the global warming debate is just too serious and boring to waste time on, like high school kids grousing about having to go to math class. One can almost hear the producers of “Meet the Press” going, “What, climate change again? Cue up the escaping llamas.”

The LA Times’s Michael Hiltzik wrote that, and he was absolutely right. One might well wonder if treating a serious subject seriously would help MTP turn around its sinking fortunes. But at least it’s good to know that if they can’t be persuaded to do the work of journalists, at least their network’s late night comic is up to the task.